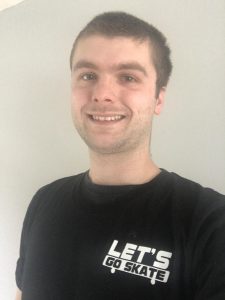 Jason begun skateboarding back in 2004 when it was the cool thing to do in secondary school and everybody was doing it. Before long he had quit playing for football teams and was focusing on flipping and grinding his board as often as he could. His teen years were spent down the local skate park in St Neots with cameras documenting new tricks he’d learnt for the ever growing social media platform YouTube.

Filmed during 2010 and 2011 this video features some of the best skateboarding Jason’s done.

One evening in 2014 a Ted talk over on YouTube gave Jason the motivation to see if it was possible to do something he’d really enjoy doing which was teaching others how to skateboard. He gained his experience with instructing thanks to years spent with Skates & Ladders teaching adults and children aplenty around Cambridge and in London. Having spent the majority of 2016 running skateboard clubs through out schools in Huntingdon he decided in October 2016 to create Let’s Go Skate. The aim being to continue to help teach anyone interested and willing to learn how to skateboard. His knowledge has helped him to create his own scheduled plan detailing all the important techniques and maneuvers  needed to ride along on a board. 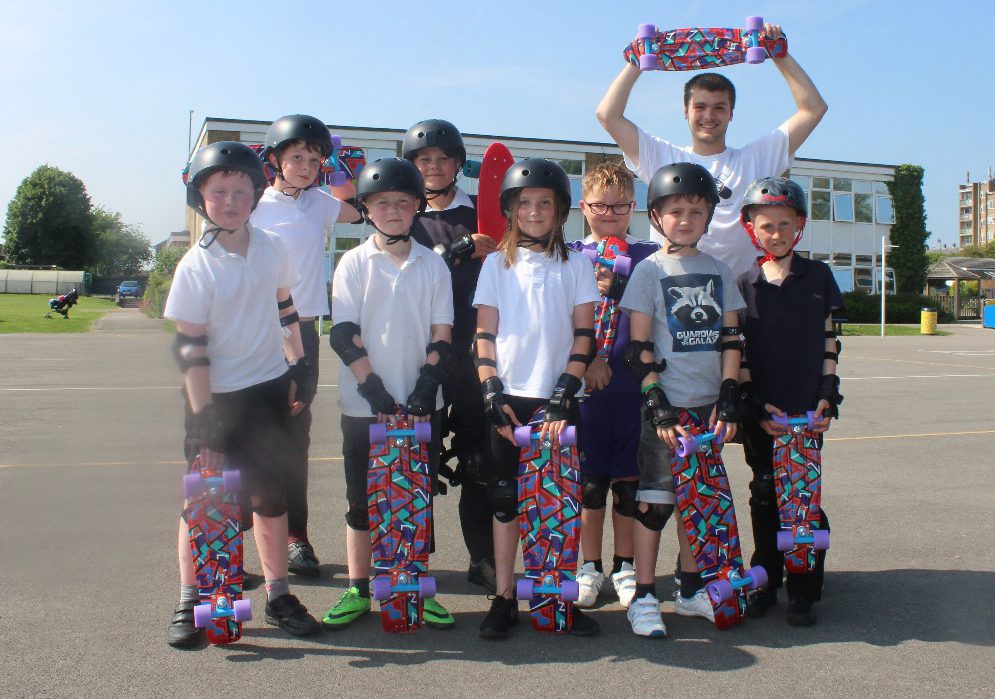 As time went by Jason started to receive Youth Work opportunities thanks to his interactions with young people in skateboard lessons and can regularly be seen at the clubs run by the charity Fusion in Huntingdon area. After seeing how little disadvantage young people can have he saw how many of interested youngsters were missing out on the chance of riding a skateboard due to not having the money to join a school club or afford private lesson fees. This has led him to focus more on funding opportunities that become available to help encourage all to have a go on a skateboard. With skateboarding set to feature at the Tokyo 2020 Olympics for the first time there’s hope he’ll be able to offer his lessons on a greater scale to more interested youngsters in the near future!

Let's Go Skate
5.0
Based on 41 reviews
powered by Facebook

Kathryn Hawkes
2022-03-06T22:51:40+0000
Awesome lesson for a 9th birthday today- Jason was fun and skilled and got all 5 kids skateboarding - and all wanting... boards for their next birthdays! really recommend, thanks Jason!read more

Marilyn Emery
2021-10-09T12:01:47+0000
Great morning with Let’s Go Skate. My Kids had great fun and lots of encouragement and tuition. They came away... feeling like they could do so much more than before and with confidence. Thanks guys!!read more

Alison Quemby
2021-07-25T15:59:38+0000
We booked a private lesson for our 6 year old and she loved it! Jason pitched it perfectly for her age and kept her... engaged and enthusiastic throughout. It was really helpful as a parent to find out how to help her progress and Jason made sure we went away with things to practice. It was a brilliant introduction to skateboarding!read more

Fiona Alsawadi
2021-07-11T23:25:41+0000
We booked a birthday group session for my son and his siblings.. and we are ALL now hooked. Jason commanded the full... attention of all the kids with his enthusiasm and humour during the lesson. he paced all the activities perfectly for our kids different ages and abilities and each one of the children had the best time. His ability to gauge the different needs of each child meant every one of them came away so proud of themselves and.buzzing for the sport. He managed to get the ones who give up to persevere, the ones who are easily distracted to focus, and the scared ones to be brave. The kids had complete fun from the minute they showed up whilst learning a new skill and increasing their confidence hugely. I cannot thank Jason enough for today and making my sons birthday truly something for him to remember.. we are already organising to book regular lessons with our kids to develop this skill and social development and I think me and my boyfriend may even book ourselves on too! I honestly cannot recommend enough booking in for children at any stage of skating interest with Jason. Complete value for money for what the kids gain from a session..they are all so excited for their next lesson!read more

Kate Howser
2021-02-18T12:51:48+0000
💯 recommend Let's Go Skate. Jason is enthusiastic, knows his stuff and brilliant with the kids. Lexi started... skateboarding in January and has now had a couple of lessons. She absolutely loves them and as soon as one has finished is looking forward to the next. Worth every penny.read more

Dave Jones
2020-02-22T16:37:53+0000
My son Oli had a one to one lesson with Jason. Jason was great and gave Oli heaps of confidence in skateboarding.... thanks Jason and if you are thinking of using let's go skate, I would highly recommend.read more

Danielle Miller
2019-09-29T12:57:53+0000
What a fantastic skate party . My 6 year old was joined by 9 friends this morning for his birthday party and wow they... really did have a fantastic time Jason was amazing kept all 10 boys entertained even took on the skate challenges the boy set for him . Extremely recommend and we will be joining “let’s of skate” in the holidays ! Thank youread more

Kerri Anderson
2019-08-25T18:59:03+0000
My son had a lesson with Jason. He was great with him. My son was a little nervous not having been on a skateboard... before. Jason introduced things step by step and was very patient and understanding. At the end of the lesson my son was very happy and much more confident than when he started. 🙂read more

Caroline Gregson
2019-08-20T12:06:10+0000
Natasha loved her beginner lesson this morning and stayed at the skate park for almost an hour afterwards practising.... Jason was an excellent instructor, encouraging where necessary but ensuring safety. We’ll be back!read more

Nicky Smerdon-Goodman
2019-08-16T22:22:30+0000
My 12 yo and 6 yo had their first lesson today. Total beginners. Jason is a great teacher and had them getting to.grips... really quickly. By end of the class both were standing and going down a small ramp on their own. They really enjoyed it and want to do it again. Thank you Jason.read more

Caroline Kinglake
2019-08-13T14:14:38+0000
My son has a fantastic time today at his first lesson. Despite being frustrated that he couldn’t skate as well as a... pro despite never having been on a board before Jason showed amazing patience!! Thank you.read more

Emily Joy Lein
2019-08-07T12:25:13+0000
My nine-year-old has absolutely loved his lessons with Jason. He wakes up so excited, and has learned a ton in a short... amount of time. Oliver talks all the time about how kind and encouraging Jason is, he's really inspired him. I highly recommend Let's Go Skate!read more

Nikki Fuller
2019-08-01T09:36:34+0000
Despite my daughter being an absolute beginner amongst the more experienced kids in the group Jason made sure he spent... a lot of time going between kids and making sure she was ok. He’s a brilliant teacher and the kids loved it! My daughter can’t wait to go back next week! His teaching style made sure she picked it up really easy and he had her full attention. Definitely come along and give it a go if you want something different to get your kids outdoors and learning a new skill.read more

Chris Elt
2019-06-20T00:05:51+0000
Booked our son into one of Jason's beginner sessions down at st neots Skatepark. From first contact and throughout the... lesson, Jason was kind, caring, attentive and understanding of childrens abilities. All of the children managed to achieve more than one amazing thing during their time with him. could not recommend him highly enough.read more

Jo Chapman
2019-06-09T19:32:40+0000
Jason put on a party for my sons 5th Birthday and I can not recommend him enough. Right from the outset, from my... initial contact, Jason was informative and very helpful! On the day the weather was against us but Jason still managed to put on an excellent party and got everyone skateboarding by the end of it, even the not so confident in the group! Lots of happy lads (and one girl) with tricks up their sleeves.read more

Jill Tickle
2019-05-04T18:35:00+0000
My daughter had her first skateboarding lesson with Jason today, she loved it.... Great beginners lesson, her... confidence grew very quickly she was ready for the ramps and nailed it. We will definitely be back for the next lesson and set of tricks.read more

Jenny Cowens
2019-04-21T20:41:50+0000
We had a great hour of family fun today when we hit the skate park with Jason. Hubby found he still had it, daughter is... getting it and me? Never had it but had fun trying to find it! I now know I’m a Goofy, tried a Caveman, almost did a 180, rode a slope and know my Hubbas from my Hips. Only one with an injury was Hubby (grazed knee, no pads). Best thing ever being called ‘rad’ several times (thanks Jason) and having a daughter who thinks you’re cool.read more

Lynette Webb
2019-04-16T12:41:41+0000
My 6 year old had a fab first session with Jason at Stukeley this morning! He really enjoyed himself and learnt some of... the basic skills he needs to start skateboarding. Jason was great with all the kids and spent time with each child to ensure they felt confident and ready to try each skill. Would highly recommend!read more

Luisa Albone
2019-03-23T21:05:38+0000
My five year old daughter took part in a group session today, she absolutely loved it.. highly recommend these guys...... hopefully they will be back in St Neots soon as I’d love her to have more lessonsread more

Hilary Newmarch
2019-03-23T20:04:48+0000
Eleanor had a fantastic first lesson at St Neots today, she was so inspired we spent the rest of the afternoon at... Alconbury Weald skatepark where she persevered until she got down a ramp unaided. She can't wait to have another lesson with you. Thanks Jason.read more

Sarah Stockwell
2018-10-13T17:48:05+0000
Such a great lesson today for my niece and her friends. They had never been on a skateboard before but after an hour... lesson they were able to do so much thanks to Jasons amazing teaching! Can't recommend lets go skate enough, absolutely brilliant!!read more

Natalie Beecher
2018-03-31T10:32:21+0000
Josie had a great time at her first skateboarding lesson-Thank You! Jason was so patient & conscious that she enjoyed... herself. Josie found it’s not quite as easy as she thought, but is keen to go again, so it’s helping with her perseverance and she must have enjoyed it!read more

Elle Hunnybun
2017-08-19T11:49:28+0000
Jason & Dave are so patient and generous with their time in teaching the children. My 12 year old daughter and 9 year... old son are loving learning to skate and especially watching the lads bomb about at the end of the session!read more

Jessica Smith
2017-07-15T15:26:27+0000
My two sons Cameron, 9 and Joshua, 6 loved the session. Both a little apprehensive to start but listened to the help... given and were soon doing the pancake flip and the caveman!! I'm very impressed, would love to see more sessions like this, happy to donate towards sessions over the holidays if it's a possibility?! Jason is great with the kids and really helps to build their confidence with positive feedback. Off the buy some protective pads now!read more

Rachel Sutherland
2017-06-21T19:03:56+0000
Jason is fab, enthusiastic and very caring with the kids. Really makes my little girl smile. Her love for skateboarding... is totally because of Jason. Big thumbs up 👍🏻read more
Next Reviews

FEBRUARY HALF TERM. As requested we are bringing b

fortunately we received the news today that Cambou

LGS Road trips are coming back! Contact us today f

When is a child ready to drop in?
YouTube Video UCnAnE0Z2KfokTMvP3qFvyog_D7ANPaT5LX4